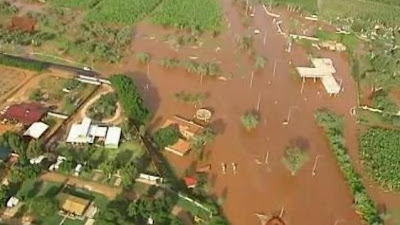 Residents of Karratha battened down and sheltered in their homes as tropical cyclone Carlos passed by, only to weaken over land and spare the Pilbara town major damage.

A mini-tornado that hit the oil and gas town on Monday damaged nearly 40 homes, forcing emergency workers to hastily make temporary repairs before Carlos bore down on Tuesday.

Residents sheltered in their homes and a relocation centre at Karratha's TAFE as Carlos edged over the coast and weakened on Tuesday afternoon, being downgraded from category 2 to 1.

There were no reports of major damage as the system continued to move southwest to threaten other coastal communities.

Monday's mini-tornado ripped through parts of Karratha, damaging houses and cars and bringing down trees and power lines.

Some large pieces of debris had to be left on Monday for later clearance by heavy machinery as Carlos hit.

Electricity crews worked into the night to restore supply to all but 60 out of about 1600 homes that had lost power.

Early on Tuesday, residents of Karratha and other communities between Whim Creek and Mardie on the Pilbara coast were put on red alert and urged to shelter in their homes or relocation centres.

At 4.20pm (WST) on Tuesday, Roebourne Shire President Nicole Lockwood said Carlos had passed over Karratha with just wind and rain left in its tail.

Crews were out assessing but there were no reports of power outages or major damage, she said.

Ms Lockwood said low lying parts of the town and caravan parks had been evacuated with people seeking shelter with family or friends or at the relocation centre.

All public schools in Karratha, Port Hedland and Roebourne were closed on Tuesday along with many major roads.

Oil, gas and port installations in the region also suspended operations in readiness for heavy weather.

The Bureau of Meteorology said that at 2pm (WST) Carlos was about 50km west southwest of Karratha and moving southwest at 20km/h.

Communities further south along the WA coast including Onslow and Exmouth are now bracing for Carlos with possible gale-force winds and flooding.

A cyclone warning was in place for coastal areas from Whim Creek to Cape Cuvier and a cyclone watch for Cape Cuvier to Carnarvon.

Gales may reach as far south as Carnarvon and offshore islands by Wednesday evening, the bureau said.

Residents of Pilbara coastal towns between Point Samson and Exmouth have been warned of higher than usual tides, rough seas and possible flooding of low-lying coastal areas.
Posted by Administrator at 1:27 PM