Roads flooded, power out in parts of Ohio, Indiana... ( wdtn.com) 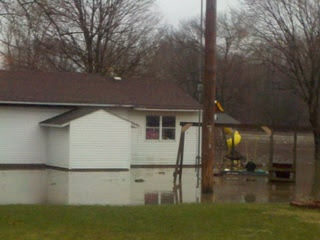 Roads flooded, power out in parts of Ohio, Indiana

COLUMBUS, Ohio (AP) - Storms with heavy rain, high winds and hail have knocked out power and flooded homes and roads in Ohio and Indiana.

An official in northwest Ohio's Auglaize County told the National Weather Service that a flash flood early Monday trapped residents of a mobile home park. No injuries were reported.

Neighboring Mercer County has many flooded homes, and high water has closed roads around the state. The flood-prone Blanchard River in Findlay was expected to spill over Monday afternoon.

The Cuyahoga Heights schools near Cleveland closed Monday because of what officials called "extreme flooding."

Utilities report at least 25,000 Ohio customers without power. Half-inch hail was recorded in the Columbus area.

Much of central Indiana is under a flood warning until Monday night.
Posted by Administrator at 3:27 PM