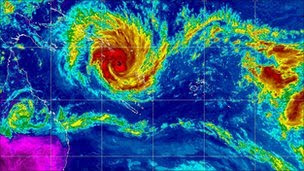 The Australian state of Queensland could be facing one of the worst cyclones in its history, as it works to recover from devastating floods.

State Premier Anna Bligh said that Cyclone Yasi had the potential to be one of the "most significant cyclones that we've ever had to deal with".

The storm is expected to hit the coast on Wednesday night.

All ports from Cairns to Mackay are to close from Tuesday afternoon and resort islands have begun evacuating guests.

The flood-hit state was struck on Sunday by a smaller storm, Cyclone Anthony, which tore roofs off houses and felled trees in northern coastal areas.

Southern and central parts of Queensland bore the brunt of flooding which began in December and peaked in mid-January with the inundation of Australia's third-largest city of Brisbane.

The government has estimated the cost of the damage at A$5.6bn ($5.6bn, £3.5bn) - Australia's costliest natural disaster.

Cyclone Yasi is expected to become a category four storm by Wednesday and to hit north of Brisbane, with the biggest impact along the stretch of coastline between Innisfail and Mackay.

"[Yasi] may well be one of the largest and most significant cyclones that we have ever had to deal with," Ms Bligh said.

"This is an event we have to take seriously. I know cyclones can at the last minute turn off the coast, and I certainly hope this one does.

"But the bureau advises me in the most serious terms, that all of the modelling right now says this is going to cross our coast."

She said that areas in the path of the cyclone could see winds of 100km/h by early on Wednesday as well as significant rainfall.

"We couldn't rule out further flooding in areas that have already experienced significant flooding in the last four weeks if this cyclone behaves in the way it's currently predicted to do," Ms Bligh said.

People in areas likely to be affected should begin preparations for the storm, she said.
Posted by Administrator at 5:13 PM