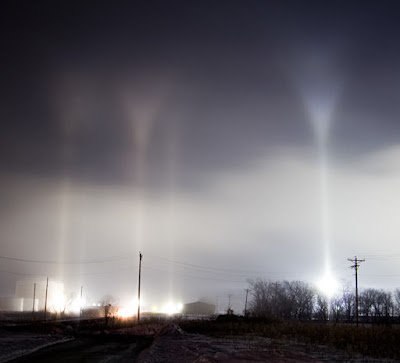 V-TOPPED LIGHT PILLARS: Light pillars are a common sight around cities in winter. Urban lights bounce off ice crystals in the air, producing tall luminous columns sometimes mistaken for auroras. But the light pillars Mike Hollingshead saw last night near a corn mill in Nebraska were decidely uncommon. "They had V-shaped tops," he explains, "and some of the Vs were nested." Here is what he saw:

"These light pillars are not just rare, they are exceptional!" declares atmospheric optics expert Les Cowley. "Ordinary pillars are produced by plate-shaped ice crystals roughly half way between you and the light source. These are different. Their rarely seen flared tops show that they were made by column-shaped crystals drifting slowly downwards and aligned horizontal by air resistance."

"The flares are a form of the upper tangent arcs that we sometimes see in daytime halo displays," he continues. "But even more exotic, some flares have a second one nested within them! Some ice crystal columns do not rotate but instead keep two of their prism faces improbably horizontal to give us the very uncommon Parry arcs of solar halo displays. The nested flares here are amazing and probably the light halo equivalent of Parry arcs."
Posted by Administrator at 1:18 PM