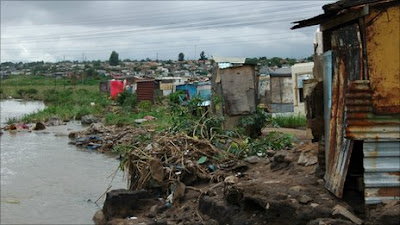 
Residents in shanty towns have been the worst affected by the South Africa floods
Continue reading the main story
Related stories
South Africa's flood toll rises
S Africa declares flood disaster
Anger, not hope in South African township
A thick stench fills the air, there is no proper sewage system in the South African township of Themba Khoza - heavy floods have destroyed all the make-shift drains and bacteria infected water is flowing through the tiny pathways between the shacks.

Residents of the informal settlement north of Johannesburg are bracing themselves for more floods.

The settlement is home to more than 2,000 people - many of the houses here are built near a river, the Kaalfontein.

The river burst its banks last week, flooding many shacks in the process.

Tharafosa Molapo, 92, is hard at work, trying to build a sand barrier around his home.


Tharafosa Molapo is worried that his shack might not survive another flood The old man is frail but he says he needs to do this to prevent further damage to the home he shares with his wife.

"We cannot sleep when it is rains, because we need to remove the water from our houses," he says.

"I have been up from 0100 this morning, scooping out water from inside the house," he adds, while holding a rusty shovel in his mud covered hands.

He has been living here for four years and describes this year's rain as the worst he has ever seen.

Eight of the country's nine provinces have been declared disaster areas after floods killed more than 120 people.

No-one has died in Themba Khoza but Mr Molapo is worried what more rains will do to their rusty shack - it has been battered by many storms.

His neighbours are no better off. Mattresses, blankets, sheets and clothes have been taken outside to dry.

Doors stand ajar to allow the air to dry the wooden planks which hold up the shacks, residents explain.

Close to 50 families have been evacuated and taken to nearby police stations for temporary shelter.

For the rest of the community, it is a game of wait and see.

Distress
Continue reading the main story
“
Start Quote
It's been a very painful experience for me. We had to throw away a lot of things because they were just covered in mud.”
End Quote
Siyabonga Mfeba
Local officials have been at pains to convince people living near rivers to relocate due to the flood risk - a battle they seem unlikely to win despite the nationwide downpours.

Like many informal settlements in South Africa, Themba Khoza has little or no running water, so for the thousands of residents a river offers a regular source of water.

But the community here is worried about the threat posed by the pools of the stagnant water around.

Green flies hovering in the air serve as a reminder of the filth.

"It's very worrying because we know that we could get all kinds of diseases from the dirty water that passes through here, it has happened before and we are worried that if the flooding continues we will definitely get sick," says Siyabonga Mfeba, who has lived here for four years.

Mr Mfeba's shack is less than 100 metres from the river bank. The floor of his shack is made from mud - when the rain came in the floor was eroded.

"Everything has just been destroyed," he says.

Mr Mfeba - who is unemployed - says the floods have destroyed many of the few possessions he had managed to amass.

"It's been a very painful experience for me. We had to throw away a lot of things because they were just covered in mud. I know I'll never be able to replace all of the things that were destroyed," he says.

Aid for victims
Continue reading the main story
South Africa Floods
More than 120 people have died in floods in recent weeks
More than 8,000 people have displaced since December
The flood damage has been estimated at 1,5 billion rand ($21 million; £13 million)
Eight of the country's nine provinces have been declared disaster areas
A few minutes away from the flooded shacks, long queues snake into the entrance of a blue and white tent - a makeshift soup kitchen.

Hundreds of residents are waiting to receive what for many of them is their first and only meal for the day.

Gift of the Givers, a non-governmental organisation has been based here since the floods started last month.

The organisation's events co-ordinator Allauddin Sayed says the floods have led to more people visiting the relief centre in the last week.

"This is the largest ever food distribution for us. We have been assisting close to 4,000 people daily - many of whom are victims of the ongoing floods," he said.

Residents are given a bag of maize meal, rice, beans, toothpaste, dishwashing liquid, washing powder and petroleum jelly for their skin.

While the Themba Khoza community is trying to return to normalcy, the possibility of more floods means the threat on their lives is never far away.

"So many people have been killed by these floods, I am lucky to be alive. I am very afraid. I don't want to die here," says Mr Molapo, as he adds more sand around his house.

This sentiment is not only shared by the residents of this desperate community but all the South Africans who have been forced to cope with the devastation of the floods.
Posted by Administrator at 4:22 PM