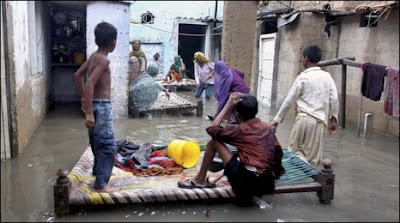 Hundreds of families are still living in flooded homes


At least 26 people have been killed in monsoon rain in the southern Pakistani city of Karachi, officials say.

Most of the deaths were caused by collapsing walls and electrocution.

The downpour flooded low-lying parts of the city and left most areas without electricity on Saturday night, but power was gradually being restored.

Pakistan's chief meteorologist said nearly 14.7cm (6in) of rain fell on the city on Saturday.

Abdullah, a resident who was standing by the body of his neighbour's son, said the child had drowned after falling into a drain.

"People pulled his body out of a rain drain which was running very fast," he told Reuters news agency.
Posted by Administrator at 11:34 AM