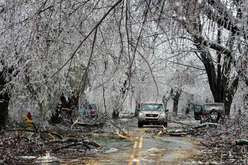 The United States are preparing for some wintry weather this Christmas, as two different storm systems head towards the west and eastern coasts. The first system, which is heading towards Chicago and the central Plains, is a combination of two areas of low pressure forecast to bring a mix of sleet and ice through Christmas Eve.

The storm will bring further heavy snow to Chicago over the coming days, causing travel problems on some of the busiest days of the year. Delays and cancellations are expected at Chicago’s busiest O’Hare airport, with near zero visibility already being experienced.

Further west, more than 10 days of wintry weather has culminated in the arrival of a storm which dumped more than 10 inches (25cm) in Portland, Oregon. The last storm of such significance was in 1980, which brought 16 inches (41cm) to the state.

The National Weather Service has issued warning for Washington State, as the second storm continues to track further east. Residents along the eastern coast are bracing themselves for a white Christmas.
Posted by Administrator at 6:23 PM